Ten years after the release of one of the most-loved movie, “Kabhi Khushi Kabhie Gham” Director Karan Johar officially announces there won’t any sequel 2 this blockbuster.

This could be heartbreak for thousands of fans who were eagerly waiting for it. Especially to see the duo of Kareena Kapoor and Hrithik Roshan after so many years again!  This film managed to create a magic on-screen and one of the reason was because it got 6 big superstars together – Amitabh Bachcha, Jaya Bachchan, Shahrukh Khan, Kajol, Hrithik Roshan and Kareena Kapoor.

Karan Johar rightly calls K3G "the pillar film of Dharma" and says, "It was my father Yash Johar's most favourite film. He liked K3G even more than my first film Kuch Kuch Hota Hai. That alone makes K3G more special to me."

“Kabhi Khushi Kabhie Gham” is rated to be the best Family flick till date not only in India but also overseas. However, Karan Johar considers it a unique movie that cannot be repeated. He concluded by saying, “I don’t think I can write a screenplay to justify the magnetism of these actors. Recreating the kind of history this film has enjoyed may not be possible. I’m scared that I may not be able to strike the same emotional chord once again. Since I don’t wish to bring even the slightest blemish to K3G a sequel is ruled out.” 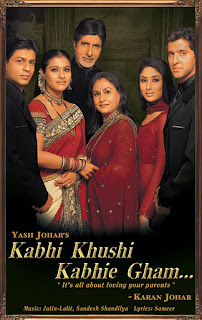 Posted by Dharma Productions at 18:59