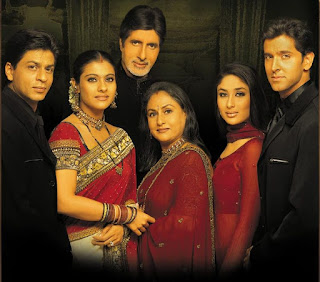 Kabhi Khushi Kabhie Gham has completed 14 glorious years in the industry breaking tons of records and grossing popularity only a few movies get to talk about. However, the zeal and enthusiasm with which fans still get hooked to their TV sets when the movie plays, makes you wonder if the movie just released. The love for Kabhi Khushi Kabhie Gham or K3G, as fans lovingly call it, will undeniably continue for years to come. This epic film gives Bollywood fans several reasons to repeatedly watch it over the years. The star studded cast, an emotionally gripping storyline, beautiful dance performances and songs, and most importantly Karan Johar’s direction finesse.

K3G was Director Karan Johar's next film after his debut with the blockbuster Kuch Kuch Hota Hai. The expectations were very high for K3G and the film met every expectation. The film had a good story, great technicians, wonderful music and arguably the biggest star-cast since SHOLAY. Getting such a star studded cast together to deliver such an explosive performance can purely be attributed to the brilliance of the then budding director, Karan Johar. His masterly touch and craftsmanship can be clearly seen in each sequence of the film.

The story of the film is beautifully intertwined with emotional lessons, which relate to the typical Indian family. The film revolves around Yashovardhan Raichand (Amitabh Bachchan) and his wife Nandini (Jaya Bachchan) and their two sons Rahul (Shahrukh Khan) and Rohan (Hrithik Roshan). Yashovardhan and his wife Nandini have raised their sons showering them with immense love and affection. Yash has tried to pass on to his sons the values, the heritage and the rich traditions of his family, which he cherishes and holds in great regard. Rahul’s adoption was a kept for a long time, but ever since he found out, his love and affection for his parents, especially his father grew ten-folds more. And he swore to go by his father’s every word and never let him down. Unfortunately Rahul is disowned by his father for marrying the wrong girl, Anjali (Kajol). Rahul and Anjali then move to London, where 10 years later Rohan tracks them down in an attempt to re-unite the family. Along the way a romance buds between Rohan and Anjali's younger sister, Pooja (Kareena Kapoor).
Amitabh Bachchan looks his role and lives his role. He's just outstanding and the character required the star presence of the Big B. Jaya Bachchan is terrific and she looked terrific. She's excellent and her scene before the ending sequence with Amitabh Bachchan was thoroughly aplaudworthy! Hrithik Roshan shines through his scenes and even though he's really mainly in the second half of the movie – he leaves a great impression. Kareena Kapoor’s portrayal of the bubbly and energetic Pooja, was a mix of adorable and perfection. The supporting cast such which included actors like Johnny Lever and Alok Nath left no stones unturned in making this film a delightful experience. However, K3G would be incomplete without the lead pair. Shahrukh and Kajol not only steal the scenes but also you hearts. Sharukh is lovable, he's charismatic, and he’s insanely good. Kajol looks amazing and her performance is just perfect.


You’ll laugh, you’ll cry, and you’ll think of your parents many a times. Certain scenes will remain in your memory for their emotive qualities long after the film is over. However, the most dramatic scene is in the second half at the mall when Nandini recognizes her son Rahul. The background music, the emotions of the two actors…..the on-screen touching narrative is simply spellbinding! That scene alone says that ultimately, your biggest connection is with your mother and that will never go away. This in addition to touching scenes like Anjali’s father dying, which has a strong impact on the viewer, Anjali and Rahul’s son, Krishi, reciting the Indian National Anthem; The reciting of the words of wisdom from Krishi to Rahul that came from Yash to Rahul, the discovery thereafter that Rahul’s houseguest is none other than his own brother. These are only some of the scenes that combined with an awesomely emotive background score; something Karan Johar obviously knew the importance of, will touch the viewer sincerely. The chemistry between all the actors is always larger than life and as a viewer, you’re always gripped to their individual stories. The strong father and son bond, the friendly relationship between the mother and her son, are all sentiments every Indian family aspires for and easily relate to.


The film is about relationships in family, about loving your parents and your family, about pride, values and regret. The well defined and written characters are used to create and present all these qualities. Even the least emotional scenes are accompanied by orchestrated violins, heavy piano and strikingly sad pictures on-screen. The film shows both the bright and dark sides of happy families, and while it never breaks new ground, never looks totally authentic, it is always entertaining in spite of its flaws. It depicts both the Indian traditional world and the western modern world and tries to bring them together in many instances.


This movie is truly a work of art, with a detailed emphasis on dazzling costumes, magnificent buildings, glitzy cars, tons of emotions. Karan Johar is a master at extracting the exact emotion that he wants from the viewer. You cannot help but weep or cry at various scenes, even though you see them coming a mile away. Never have we witnessed such an emotional family storyline packaged in such a powerful way. The music is just remarkable. Songs like Shava Shava, Suraj Hua Madham and the title track Kabhi Khushi Kabhie Gham sung by Lata mangeshkar is a pure musical marvel. What’s more, each song was accompanied with dazzling dance performances, which are a visual treat at all times. Hrithik’s dance moves till date leave viewers breathless.


These are just a handful of the many reasons why fans till date religiously sit in front of their TV sets, sometimes with a box of tissues, to watch their most beloved film, Kabhi Khushi Kabhie Gham. And if you haven’t seen the film yet, do yourself a favour and add a lot of Khushi in your life by watching one of the most epic films to be made in Bollywood.

Posted by Dharma Productions at 18:35 4 comments: