This year when Karan Johar celebrated his 39th Birthday, the occasion turned out to be equally huge for Dharma fans, who got an opportunity to witness Karna's directorial Blockbuster Kuch Kuch Hota Hai on Big screen, in Mumbai.

The buzz was unleashed on Dharma's official page, in the form of group interactions & Contests! Reviving the era of ‘PyaarDostiHai’ after 13 years, the invitation to this screening was open to Dharma fans actively participating on social networking platforms. 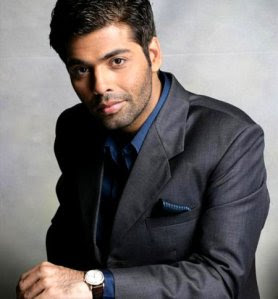 Fans were so thrilled to relive the magic after ages on Big Screen & still couldn't get enough of Kajol & King khan's Chemistry! The oohhhs & aaahhhs went through out the screening & the experience couldn't get any bigger, sure to rule the mind of every Dharma Fan for years to come.
Posted by Dharma Productions at 15:36 No comments:

Karan Johar has been invited to be a part of the diamond jubilee celebrations marking 60 years of Queen Elizabeth II's reign on the British throne in June 2012.
The filmmaker has also been selected as the goodwill ambassador of the 2012 London Olympics that begins in July.

A pleasant surprise
A source close to the producer-director says, "KJo was pleasantly surprised when they asked him to be the goodwill ambassador of the London Olympics.

It's a twin honour for him as he will also be part of the 60th year celebrations of queen's ascension to the throne."

Citing the reason for his selection the source says, "Any one who has had an impact on the city of London has been invited to be the goodwill ambassadors.

They have honoured Karan's connection with England through the strong medium of Indian cinema. They feel his cinema bridges
B-Town with the people of England."

The top three Bollywood films in the UK are Kabhi Khushi Kabhie Gham, Kabhi Alvida Na Kehnaa and My Name Is Khan all produced and directed by Karan," the source adds.

Karan's goodwill ambassadorship will be announced today in Bangalore followed by a grand event in London in September.

The source adds that Karan takes a holiday to London frequently to write his scripts. "London is one of Karan's favourite cities in the world.

He is emotionally attached to it since he first went there on a holiday as a 10-year-old with his parents."

Source: Mid Day
Posted by Dharma Productions at 11:25 No comments:

Vote for the funniest thing about 'I Hate Luv Storys'