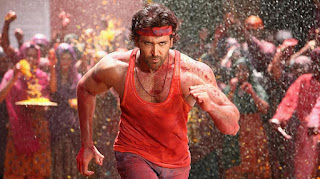 Bollywood star Hrithik Roshan has emerged as the World’s sexiest Asian Man in 2011. According to a survey conducted by the Eastern Eye Weekly, Hrithik, 37, beat many high profile stars to top the 50-strong list. The popular A-list actor won by the largest margin in the history of men’s list, to topple last year’s winner Ranbir Kapoor, who finished sixth.
Hrithik who was third last year, got votes from all over the world from fans of different ages and cultures via social networking sites like Twitter.
He has acted in the most anticipated ‘Agneepath’ remake and featured as a judge on the hit TV show ‘Just Dance'.
Hrithik is a worthy winner, a leading man with a global appeal. This year, there was a massive gap between Hrithik and the rest of the competitors. He is the perfect ambassador for India and someone who could take on anyone in Hollywood in terms of looks, talent and likability,” said Asjad Nazir, Eastern Eye showbiz editor.
Posted by Dharma Productions at 18:55