Karan Johar has thrilled for two reasons: one, about remaking Agneepath, a cult classic that his father Yash Johar made and two, about signing Hollywood make-up artist Robin Slater, who happens to be a two-time Oscar nominee.

Slater will design the look for both Hrithik Roshan and Sanjay Dutt in the remake. 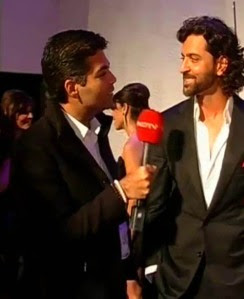 Slater is not new to Bollywood though. Our source said, "Robin has known Karan for some time now. She also worked on SRK's look in My name Is Khan."

The late Mukul S Anand directed the 1990 original, which starred Amitabh Bachchan, Mithun Chakraborty and Danny Denzongpa in the lead roles. The remake will be directed by Karan Malhotra and is already on floors.

The source added, "To design a special look for Vijay Deenanath Chauhan's character and that of Kancha Cheena's played by Hrithik and Sanju respectively, Robin was chosen again."

Apparently, Slater is currently in Mumbai and is working on both Hrithik's and Sanjay's looks. And guess what? Both their looks will be very different from the looks sported by Amitabh Bachchan and Danny in the original.

The shooting has already begun, they say, but the looks are being kept under wraps.

When contacted, Karan Malhotra, the director of the film, confirmed the news and said, "Yes, Robin Slater is on board." However he refused to divulge any further details about the looks of the cast.

Robin Slater has been the make-up artist for many Hollywood blockbusters, including Just Married, Buffy the Vampire Slayer, Planet of The Apes and The Grinch Who Stole Christmas apart from others.
Posted by Dharma Productions at 16:11 No comments: