Karan Johar on the sets of Student Of The Year

The shoot for ‘Student Of The Year’ is going strong and Karan Johar recently tweeted on a micro-blogging site saying, “Back on sets of "student of the year"!!! Shooting in a classroom!!! I am feeling like a retired professor”‘Student OF The Year’ is a youth centric film & after a long time Karan is working on this kind of genre. After trying his hands at serious films like ‘My Name Is Khan’ and ‘Kabhie Alvida Na Kehna’, ‘Kabhie Khushi Kabhie Gham’, etc he is bringing back the era of Kuch Kuch Hota Hai.

Apart from Karan Johar directing this movie there’s another factor in this movie to look forward to. The very talented director David Dhawan’s son Varun Dhawan is making his debut with this film. Furthermore, the other two leading actors are also fresher - Alia Bhatt and Siddharth Malhotra. First time ever when Karan Johar is working with a new star cast.

The movie is coming out next year and the release date is not final yet. 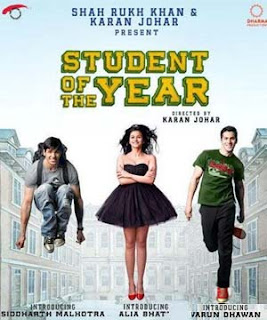 Posted by Dharma Productions at 19:52