Karan Johar publicly announced yesterday on the micro blogging site - twitter, that the shoot for Ek Main Aur Ekk Tu was over and the promo was all set to be launched on November 30, 2011. The theatrical trailer will be played with an upcoming movie dirty Picture from December 2, 2011.
Ek Main Aur Ekk Tu is the first movie where Imran and Kareena will be seen together. The movie looks promising and interesting especially with the star attraction to be seen. There is a lot of anticipation among the Imran and Kareena fans to catch a glimpse of the most talked about and beautiful on screen pair and be charmed by their chemistry.

Director Shakun Batra is very excited about his first film. He disclosed to his fans that the promo has received good feedback from every one and he is eagerly waiting to see the audience reaction to the theatrical trailer.
What remains to be seen is whether this romantic movie Ek Main Aur Ekk Tu truly succeeds in wooing the audiences like the previous Dharma movies. 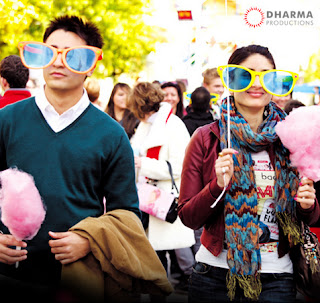 Karan Johar's Tweet: "The EK MAIN AUR EKK TU promo will be launched on the 30th of NOV...and will also play in theatres with DIRTY PICTURE!!!!"
Posted by Dharma Productions at 19:51