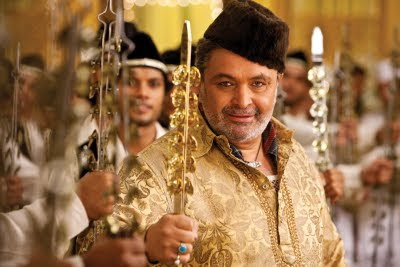 After 27 years, Rishi Kapoor is doing a movie with Dharma productions; ‘Duniya’ (1984) and now ‘Agneepath’ (2012). 27 years of span and the actor got a role from Dharma which he could not deny. Rishi Kapoor is playing the role of ‘Rauf Lala’ in the movie and his look speaks volumes about the theme of the movie and his character.
The poster picture of his look is being loved by the masses and it is creating curiosity for all his fans. Rishi Kapoor as we know is a brilliant actor and has done complete justice to the role. His look completely justifies with the detailing that has been poured into his look and the fans are going gaga over it.
The movie releases on the 13th of January, 2012, and along with Rishi Kapoor the entire cast of the movie and Dharma Productions hold this movie extremely close to their hearts. The news from the sources say, that Agneepath is going to be bigger than where our imaginations can reach. :)
Posted by Dharma Productions at 20:09