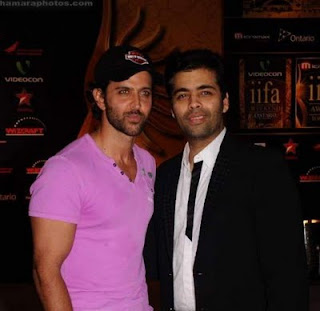 Dharma Productions has given us some brilliant movies in the past few decades... some of which have been directed by the ace Karan Johar and some by other extremely talented new directors. Dharma is known for encouraging young many young, talented and fresh directors to make the film they believe in. Karan Malhotra, who was the associate director on My Name Is Khan, is praised to no end by his mentor Karan Johar and is directing the upcoming remake version of Mukul Anand's Agneepath.
It was the director's birthday on 24th July, when the entire team celebrated this day with him on the sets of Agneepath. Bollywood, as we all know, is known for it’s uniqueness for every celebration, team Agneepath did not fall short on it's reputation too! They are a team of people who are said to take work & fun seriously. The entire team gave him a very special surprise by getting a special cake baked for their director, Karan, with his picture on it!!
And the team Agneepath quickly followed the birthday fun rituals and got back to working again. A very sweet gesture by an extremely hard working team!! :)
Posted by Dharma Productions at 11:32