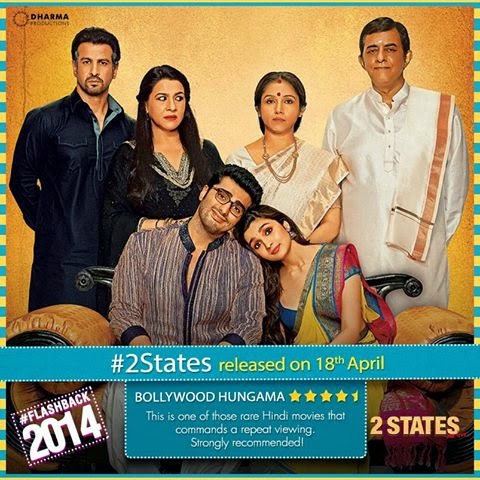 North Indians and South Indians have always been poles apart. Especially since the two communities are geographically located far apart from each other. In Abhishek Verma’s ‘2 States’, we see one such instance of North meets South when the Malhotras meet the Swaminathans.

The film portrays a young couple from two completely different cultural backgrounds falling in love and all the quirky situations that take place between the two families. ‘2 States’ has a very strong on-screen presence owing to the simple narrative style coupled with the fact that the film was an adaptation of well renowned author Chetan Bhagat's best-selling work. The film is a magical north indian-south indian love story you wish would never end. It creates a world where characters don’t shout to be heard. They just belong to a world where being proper, politically or otherwise, is not always a pre-condition.

In India, one doesn't simply marry the boy/girl; you marry their entire family. 2 States documents Ananya Swaminathan and Krish Malhotra's trials as they try their best to convince their families of their love towards each other. Unfortunately their effort of bringing their families together threatens to tear them apart.

‘2 States’ has more than its fair share of Madrasi-Punjabi jokes. Throughout the beginning of the film, Krish uses his Punjabi-ness as an excuse for everything. Sample this, "Punjabi hoon. Khoon garam hota hai humara." The song-and-dance sequence at Krish's cousin's wedding undermines the seriousness of the culture clash but provides a good enough opportunity for 2 States to take a strong, unapologetic and rather hilarious stand on dowry -- something that North Indians have normalised a little too much.

Alia Bhatt comes off as a complete surprise. She leaves behind her earlier films, and gets into a whole different character; she is easy, fresh and natural. Alia really grows into her character and makes you believe that she's a career-oriented IIM-A grad. She has simply done a phenomenal job of acting in this film.

All in all, there's nothing in this world that should hold you back from watching 2 States. If you're as desi as the next person, you’ll definitely want to run home after watching this film and give your parents a big hug.
Posted by Dharma Productions at 16:02