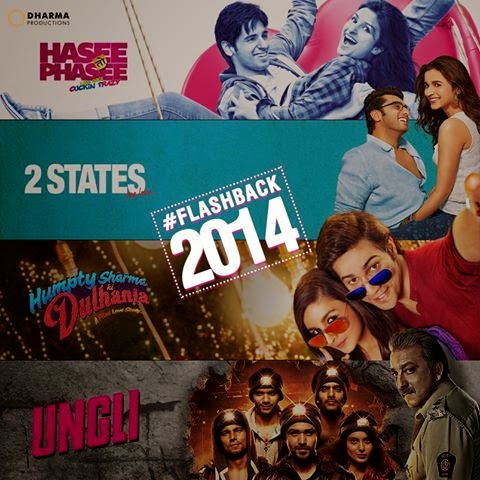 2014 has been quite a big year for Dharma Productions as it has seen the premiere of four amazing films i.e. Hasee to Phasee, 2 states, Humpty Sharma Ki Dulhania and Ungli. These films were big hits at the box-office. People who watched Hasee to Phasee had fallen head over heels in love with the protagonists; Sidharth Malhotra and Parineeti Chopra. The film touched the hearts of many people as they could easily relate to the whole opposites attract scenario. This romantic comedy mirrors the quirks in human nature subtly, and provides humor in everyday situations; in the family and amongst friends. If you're looking to rediscover the magic of goofy love, give this movie a shot.

The second epic Dharma film of 2014, 2 States, was another great hit amongst the audience. The film portrays two people from two completely different cultural backgrounds falling in love and all the quirks in between. What makes 2 states work was the simple narrative coupled with the fact that the film was an adaptation of well renowned author Chetan Bhagat's best-selling work. The film is a magical north Indian-south Indian love story you wish would never end. It creates a world where characters don’t shout to be heard. They just belong to a world where being proper, politically or otherwise, is not always a pre-condition.

Humpty Sharma Ki Dulhania, which released in July 2014, was the third dhamakedar Dharma film of this year. This film was a great success as Varun Dhawan and Alia Bhatt played the lead roles and did a sensational job at that. They win you over with their honest, unbridled performances. It was an excellent spin off on Dilwale Dulhania Le Jayenge, and the youngsters of this generation could totally relate to this film.

Finally, the fourth and final release of the year, Ungli was an important film as it took on the social evils in society. The ungli team, with their dialoguebaazi, went out of their way to put an end to corruption. All in all, 2014 was an amazing year for Karan Johar and the whole of Dharma productions. Karan Johar is most excited as he is already working on ‘Ae Dil Hai Mushkil’ and a bevy of interesting forthcoming projects that Dharma has recently announced for a 2015 release. Here’s wishing that 2015 will bring all the love and success that 2014 has brought us.
Posted by Dharma Productions at 20:36