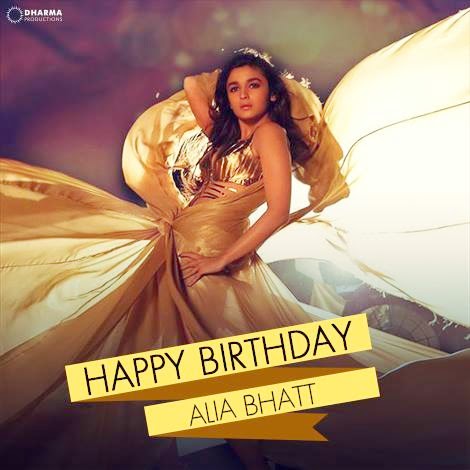 It is time to blow the birthday candles as the darling Alia Bhatt celebrates her birthday today. The bubbly, cute and versatile actress has become a fan favorite with her spirited performances.

In her very first film, SOTY, which turned out to be a blockbuster, she showed promise of becoming a star. In her next Dharma film, “2 States” she established herself as an actor of great dramatic caliber. In her third film, “Humpty Sharma Ki Dulhaniya” she showed a comic side which wowed audiences everywhere.

But, before all the stardom came the hard work and perseverance. It is this “zest” as Karan Johar likes to put it, that saw her bagging the lead role for SOTY. Manish Malhotra who was the costume designer for the movie also hails Alia for being stylish and found it great to dress her up. So much so, that in his own words they “just went on and on with the clothes…”.

With the hits piling up one by one, we can only hope that she keeps entertaining us for a long time. But, till we see her again on the silver screen, here’s a collection of songs from Alia’s movies -  and a video of the adorable fashionista for the fans to enjoy.