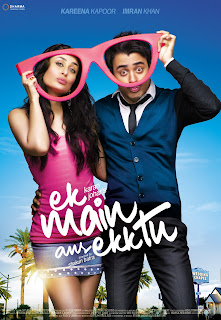 Imran and Kareena’s new movie Ek Main Aur Ekk Tu has been the topic of interest and discussion for quite some time.  The movie which essentially talks about a modern day love story which starts ‘The other way around’ has sparked interest among people of all ages. The movie breaks the trend of the clichéd movies in the romantic genre.  With all the hype generated, People are waiting with anticipation for the movie to release on February 10, 2012.

Till now, all the elements released from the movie, have been widely accepted by all the fans.  The trailer has become really popular and people everywhere have been humming ‘Talli Hai Zameen’ and Aunty Ji’ from the movie.  Imran has also taken the liberty to document all the madness on the sets, for all the EMAET fans. The videos released in the form of video blogs became an instant hit as people rushed to the YouTube channel  to watch the blogs.  Apart from all these elements team EMAET has had their hands full trying to give the fans a full entertainment package with the launch of fun and interactive applications like the Mismatch and the Groom You application.

Kareena and Imran have been grabbing eyeballs everywhere they go. Not only that, Imran seems to have a lot of fun with our pretty girl. Imran, much to the delight of Kareena, went ahead and clicked candid pictures of her at a recent promotional event.
In order to make the lives of fans easier, team Ek Main Aur Ekk Tu has also given the fans the facility to book tickets to their favourite movie through the social media platform-Facebook.  All the fans need to do is go to the official Facebook page of EMAET and book their tickets on the special ticketing tab that has gone live since the morning of February 7, 2012. Clearly, the gesture has been highly appreciated by the fans judging by the number of responses received in a few hours.

We are sure that team EMAET has done their best to ensure that the film is a super success. We are all waiting with baited breath for February 10 where all the fun unfolds on screen.

Posted by Dharma Productions at 19:07