An excellent response by audience for EMAET!!!

Today, Ek MAin Aur Ekk Tu crossed 70,000 fans! With more than 20 days to release the film has already reached such high numbers on Facebook Page. Not only this, the movie is doing pretty good over every social media platforms... On YouTube the views on EMAET videos has reached 15 Lacs views and more than 1,700 followers on Twitter. 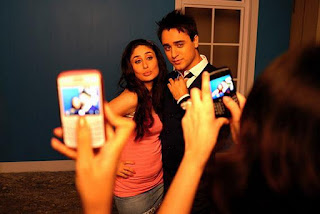 In addition, the vBlog by Imran Khan did wonders! A series of clip taken by Imran between the shoots of EMAET was a innovative idea and it made fans more curious about the movie and this can be said with more than 4.5 views on Imran's vBlog.

The movie is releasing on 10th February, 2012 and with excellent response from Social Media our fingers are crossed that it will create magic on screen :)

Posted by Dharma Productions at 19:36