‘Rishi Kapoor’ gets out of the box with ‘Dharma Productions’ 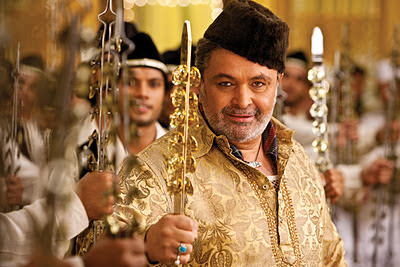 Rishi Kapoor, the first ever chocolate boy of Bollywood has been an on screen lover boy for decades. From his debut ‘Mera Naam Joker’ to present day, Rishi Kapoor has been loved and renowned for his romantic roles.
He featured with Amrita Singh in the movie ‘Duniya’(1984) under Dharma Productions. Now after 27 years the veteran actor will appear in the upcoming mega movies under Dharma banner which will release in 2012 which are ‘Agneepath’ (26th January) 2012 and ‘Student of the Year’ in (2012 summer).
Both these roles are extremely different from what he has done in his entire career. In Agneepath he plays a negative role and in Student of the year he is the dean of the school, which again is a different character from his past roles.
His look in ‘Agneepath’ (2012) trailer is being applauded world over and it looks like Rishi Kapoor has gotten the unconventional roles that he has been looking for, via Dharma Productions.
Rishi Kapoor says, “This is that time of my career when I get to experiment and I don’t want to play the conventional father. Besides, I can’t say no to Karan.”
Posted by Dharma Productions at 19:27