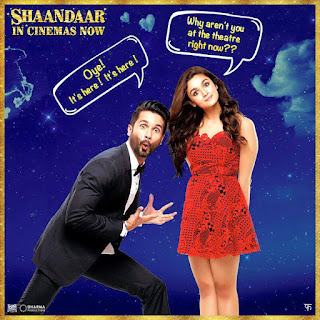 After the much loved film Queen, director Vikas Bahl is back with a bang with Dharma Productions’ Shaandaar. The film truly lives up to its name with sprawling sets, grand locations and amazing cinematography. This movie, which is Bollywood’s first destination wedding film, unites three members of the Kapoor Family – Pankaj Kapur, Shahid Kapoor and Sanah Kapoor. The protagonists – Jagjinder and Alia – have insomnia and the movie touches upon the effects of this condition. Sanah Kapoor plays Isha who is the bride and Alia’s half sister.

The picturesque locations of Shaandaar took everyone’s breath away. Shahid and Alia Bhatt’s spellbinding chemistry impressed one and all. No wonder they earned the nickname ‘Shalia’, coined by their fans, for themselves. The up-beat album of the film, too, caught on with the audiences. Another highlight of Shaandaar is Sanah Kapoor, who is a definitely a bundle of talent just like her gifted parents. Last but certainly not the least, one of the best parts of the movie is the deep bond between the two sisters and the quintessential father-daughter relationship.

Overall, Shaandaar proved to be a fun film with some amazing songs and some shaandaar performances. Have you watched it yet?
Posted by Dharma Productions at 14:30