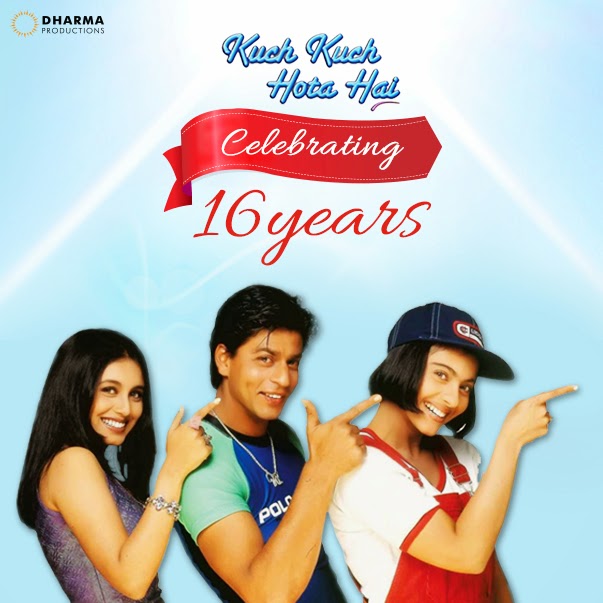 16 years ago, Karan Johar first burst onto the Bollywood scene as a director with 'Kuch Kuch Hota Hai'. The film, that starred Kajol, Rani Mukerji and Shah Rukh Khan was a spectacular box office hit and paved the way for him to direct more movies like 'Kabhi Alvida Na Kehna', ‘Kabhi Khushi Kabhi Gham' and 'Student Of The Year'. Karan Johar was 25 when he made his directorial debut.

'Kuch Kuch Hota Hai' makes Bollywood look cool again. The Riverdale School look, complete with the hip clothes and sets, makes even the staunchest of snobs sit up and take notice of the film. After all here is a film where even the extras look as hot as the heroines.

Shah Rukh Khan as Rahul is the undisputed star and crowd-puller of the movie, also Salman Khan’s cameo takes the film to a whole different level. Kuch Kuch Hota Hai is one of those films, where Salman Khan displays his acting chops and gives a showcase of what he is truly is capable of.

The chartbusting soundtrack for 'Kuch Kuch Hota Hai' remains one of Bollywood cinema’s finest albums ever. It is a 90s classic that continues to resonate in the hearts of many a music lover. Be it the title song or Ladki Badi Anjani, or that theme tune that has become part of the Dharma Productions logo clip; romance has seldom sounded so melodious.

In a movie that starred two Khans, Kajol manages to overshadow them with her career-best act in an author-backed role that does complete justice to her range as an actress. As the sporty Anjali who goes from looking like a tomboy, to becoming the perfect dulhania, Kajol scores a three-pointer in every sense of the word.

Among the many awards the film garnered for its makers and cast, 'Kuch Kuch Hota Hai' also went on to win the National Award for providing wholesome entertainment in 1999. On its 16th anniversary, come join us in celebrating a film that has taken us through a range of emotions! Do tell us your favorite moments from the film in the comments below.
Posted by Dharma Productions at 18:08