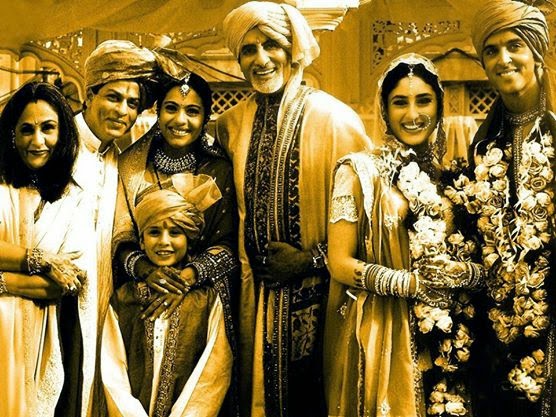 You don't choose your family. They are God's gift to you, as you are to them. The love of family and the admiration of friends are much more important than wealth and privilege. A perfect example of this is the film ‘Kabhi Khushi Kabhi Gham’ directed by Karan Johar and produced by his father Yash Johar. The movie was made to evoke nostalgia among those who have left their families to start a life elsewhere.

The film revolves around the affluent Raichand family. A family that faces trials and tribulations, but at the end of the day still have the heart to forgive each other’s mistakes, no matter how grave the problem is. Amitabh Bachchan plays the role of Yash Raichand who is a prosperous businessman in New Delhi. He is portrayed as fiercely dominating, and controls the lives of his wife and his 2 sons. However amidst his dominating nature his wife Nandi Raichand played by Jaya Bachchan and his 2 sons ignore this controlling side of his, and love him unconditionally for the person that he is.

Yash Raichand has 2 sons Rahul and Rohan, the earlier is elder and the latter is younger. Rahul falls in love with a Punjabi girl belonging to a lower socio-economic background than the Raichand family. Yash is outraged by Rahul’s decision to marry someone from a lower background. Being the adopted son of the family, Yash disowns Rahul and asks him to leave the house after marrying Anjali Sharma (Kajol). Rohan the youngest brother and son of the Raichand family takes it upon himself to bring his brother back home, and solve their disputes and differences together as a family.

This film teaches you the importance of family, and how important it is to value your parents and siblings. The one thing that people should always remember is that no matter how bad the situation or how serious the problem is, your family will always be by your side. After all the saying goes, ‘Family will always stick with you through thick or thin.’

Posted by Dharma Productions at 11:00