Finally, a villain you will fall in love with! 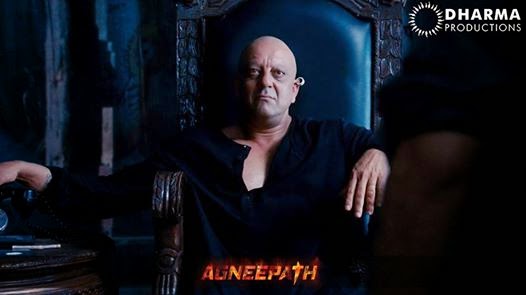 Sanjay Dutt garnered appreciation from all quarters for his wicked smile, puffed-up eyes and malicious appearance in ‘Agneepath’. However, he admits that his 'villainous' act scared him as well. In Karan Johar's Agneepath, Sanjay essays the role of the villainous Kancha, a reprisal of the equally villainous ‘Kancha Cheena’ made notorious by the inimitable Danny Denzongpa in the original movie, while Hrithik Roshan  reprises the role of Vijay Dinanath Chauhan.

Dutt’s Kancha is shown as a wicked bald man who dons a black Dhoti Kurta, with an overpowering physique, tattoos on his arms, a silver ring on top of his left ear and sporting a black Dhoti Kurta. This menacing look of Sanjay Dutt in the film was painstakingly created to meet the director’s expectations. Karan Malhotra admits that Kancha’s look was designed keeping Marlon Brando’s ‘Apocalypse Now’s’ bald look in mind, Sanjay however respectfully disagrees. Other than the earrings that Brando’s Colonel Walter E Kurtz doesn’t wear Sanjay points out that Kancha doesn’t even have eyebrows and eyelashes. Sanjay was initially supposed to go in for prosthetics but when the make-up started melting in the heat of Diu, he decided to shave his head for the first time in his life.

The bald look instantly became an eye catcher in the film’s first promos, as did the dialogue, ‘Vijay Deenanath Chauhan ko marna padega’ (Vijay Deenanath Chauhan has to die), followed by vile laughter. Dutt admits that he was inspired by Jack Nicholson’s Joker in Batman and it was on his mind when he was working on Kancha‘s laugh. In an interview, Sanjay also admitted that during dubbing for the film he needed to take a break because he couldn’t see himself like this, his own portrayal of Kancha left him disturbed! Sanjay says, “Our film is not a remake but a tribute to Agneepath and its director Mukul Anand. It’s Karan Malhotra’s vision and story. It took guts for a debutant director to take on an iconic film, but he’s come through with flying colours. He even made life simple for me by sketching out Kancha perfectly.”

Everyone who’s seen the film will agree that Kancha is one villain you will grow to love, simply for the iconic way in which Sanjay Dutt has pulled off the role. For someone who has always played the more heroic roles, this was a first for Sanjay Dutt and he certainly deserves applause!

Posted by Dharma Productions at 20:59