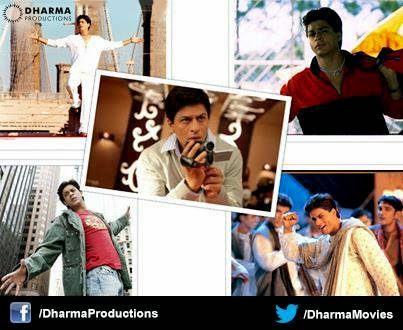 Shahrukh Khan shares a very special spot in our Dharma Family. He has played a wide spectrum of roles in the history of Dharma films. A high school student, a terminally ill patient, a successful soccer player and finally an autistic individual accused of being a terrorist; yes Shahrukh Khan has done it all and done it well. He has shown vast amounts of versatility in the various roles he has pulled off in our films.

We all fell in love with Mr. Khan when he played the role of a college heartbreaker, in one of his first films with Dharma Productions; ‘Kuch Kuch Hota Hai’. Those heart-touching moments he has with Anjali (Kajol) when he tells her “Kuch Kuch Hota Hai Anjali, tum nahi samjhogi” still brings back memories to us. He also did an outstanding performance in ‘Kabhi Khushi Kabhie Gham’ where he plays the role of an adopted child who does his best to please his parents and show them his love and respect. He is an ideal child who always thrives to expresses his loyalty and devotion to his family. In ‘Kal Ho Naa Ho’ we see Shahrukh Khan playing the role of Aman Mathur, a terminally ill patient who tries to play matchmaker for Naina (Preity Zinta) and her friend, Rohit Patel (Saif Ali Khan). Their on-screen relationship brings tears to much of our audience eyes even till date.

We then see Mr. Khan transform into a slightly different persona when he plays the role of a successful soccer player, who loses his career due to an accident in ‘Kabhi Alvida Naa Kehna’. He along with Maya (Rani Mukerji) are seen throughout the movie as trying to help each other fix their respective marriages but end up realizing they are made to be with each other. Finally, we see King Khan as the autistic Rizwan in ‘My Name Is Khan’. He takes the request of his wife Mandira (Kajol), seriously and sets out on an epic journey to tell the people of the United States and the President that his name is Khan and that he is not a terrorist.

Shahrukh Khan starring in Dharma Productions films over the years has given us an idea of just how multi-talented and how good an actor he is! We would like to thank SRK for all the magical moments and memorable times he has given us in such lovely and diverse performances! Thank you SRK, you truly are ‘King Khan’!
Posted by Dharma Productions at 16:53