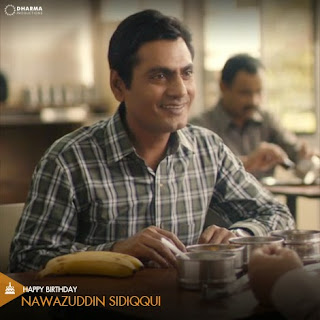 Indian cinema has always had variety of actors. Each generation producing actors who have enthralled audiences. The current generation has had heartthrobs. But, one actor has quietly made his presence felt in Bollywood with his power-packed performances. He is none other than the affable and versatile Nawazuddin Siddiqui.

With humble beginnings and a whole lot of struggle, he made his Bollywood debut in 1999 and has steadily made his way to the top. Many of his movies have made it to top international film festivals, a credit to his talent and ability. His high point came when he starred as ‘Shaikh’ in the much acclaimed movie ‘The Lunchbox’. The critics were raving about his performance and it didn’t go unnoticed in the eyes of the jury as he bagged the Filmfare Award and the Renault Star Guild Award for the Best Supporting Actor.

The journey though has just started and we can expect many more awards and entertaining performances in the coming years. On this day, Dharma wishes him many many happy returns of the day and hope that he achieves greater feats in the world of cinema.
Posted by Dharma Productions at 18:37