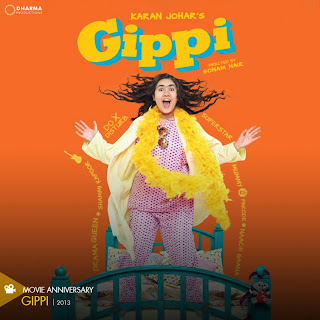 Indian cinema has had its fair share of glorious moments, moments that have left an indelible mark on the minds of the people. Some performances and movies have broken the norms laid down by society. ‘Gippi’ was one such movie. Dharma is known for its out of the box thinking, and this was another attempt at establishing the same.

With its unique story centered on a school girl’s journey of self discovery, the audiences were in for a surprise as this was a one of a kind story. It was the first time that a movie was focused on the problems of teens. It gave all the teens and the parents a new perspective about how difficult it is to be a teenager in today’s world. Not only that, it brought to light the important subject of fat shaming that is common amongst teenagers.

The way Gippi fights her inner demons and the awkward feelings that she has is worth noticing. Although her love life and studies are not in the best of conditions, she finds a way to turn things around. A big part in this transformation is played by her cool mother who always supports her during her tough times. The way she backs Gippi during her coming of age days and gets her out of the troubled love life phase is something that every parent must make a note of.

As with every Dharma movie, Gippi also had fabulous music. The compositions of Vishal-Shekhar and the lyrics of Anvita Dutt Guptan worked their magic on the audiences. All the songs went on to become people’s favourites.

But, this didn't end here as the movie also received critical acclaim for touching hearts and successfully executing an unusual tale about the triumph of the underdog.

Two years have gone by, but the story and its characters are still fondly remembered by one and all. We at Dharma wish the entire team of ‘Gippi’ a very happy 2nd movie anniversary and continued success for many more years to come.
Posted by Dharma Productions at 12:03