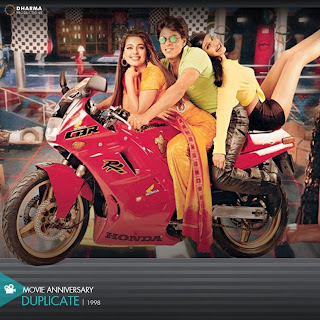 In its rich history, the Hindi film industry has seen famous double roles being played by the biggest of stars. Each of these stories has been etched into our minds and is fondly remembered. One such movie that captivated the audiences with its witty and humorous rendition was ‘Duplicate’.

The movie cashes in on the successful formula of duplicates stuck in their own worlds and how they come face to face and what changes it brings about. The king of Bollywood Shah Rukh Khan played the roles of both Bablu and Manu. He was ably supported by the beautiful Juhi Chawla and the pretty Sonali Bendre who played the roles of Sonia and Lily respectively. With a star cast like that, the movie was able to captivate the audience and ended up being termed as a laugh riot.

While the general trend of movies having double roles is to have a happy ending with both doppelgangers uniting, trust Dharma to be different and look beyond the norms. The villainous Manu isn’t redeemed and his grey shades add the much needed twist to the plot.

With such an amazing mix of talent, the nominations and awards were sure to follow. Juhi Chawla was named the Most Sensational Actress for her amazing role in the flick.

The years have since rolled on since the film’s release but it still tickles the funny bone of audiences across the world. We wish the entire team of ‘Duplicate’ a very happy anniversary and continued success in the years to come.
Posted by Dharma Productions at 12:18