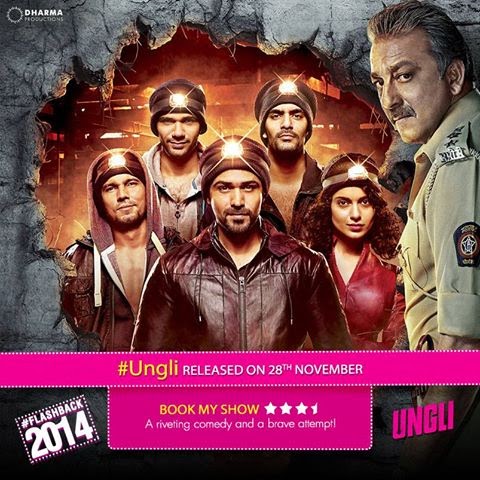 Ungli, which released in November 2014, was one of those rare films that set itself apart from the rest. The film focuses on the rampant corruption in society and how a team of four friends join forces to form a team of vigilantes out for revenge. They are later accompanied by Nikhil (Emraan Hashmi), an ex-police officer who got suspended because off his irresponsible behavior during duty.

Director Rensil D’silva has in a very unique way brought forth a social message through the quirkiness of this film. The film’s underlying motto simply focuses on fighting corruption and going against the system to achieve justice. It is an intelligently written, tightly constructed film which is fun, witty and relevant, all at the same time. As the film was written by the same writer of Rang De Basanti, it shares a similar spark of brilliance. Rensil has done a phenomenal job of keeping the story moving at a steady pace with a fantastic climax towards the end. His work on this film is nothing short of a genius!

The camaraderie between its actors is palpable as Emraan Hashmi and Sanjay Dutt dished out a truly power packed performance. And not to mention the Ungli gang’s witty dialoguebaazi. Ungli might not offer a solution to our day to day problems but does an outstanding job at tapping the right chords and sentiments and translating it on screen and met out a hard befitting answer to the culprits. And lastly, the best thing about Ungli is it doesn't get preachy; it asks you to rise up for your rights without hammering your head to it.

Being the fourth and final release of the year from Dharma Productions, Ungli was an important film as it took on the social evils in society. The ungli team, with their dialoguebaazi, went out of their way to put an end to corruption.
Posted by Dharma Productions at 11:26