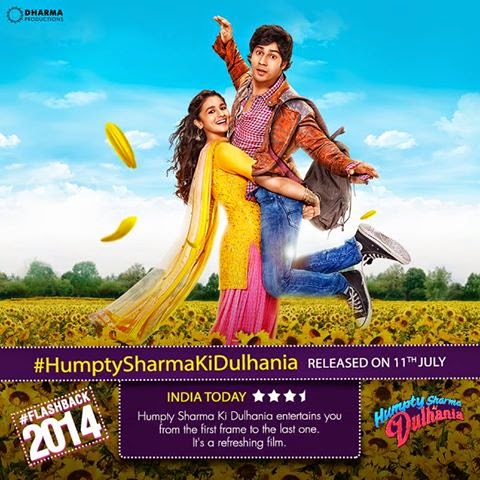 ‘Humpty Sharma Ki Dulhania’ is akin to some nostalgic films we relished in 1980s and 1990s. The time-tested template of boy meets girl, love blossoms, boy/girl's authoritarian parent act as a roadblock, worked very well as the theme of the film. However, Shashank Khaitan took it one step further by making sure to prettify it with dollops of entertainment, light-hearted drama, heartfelt emotions and of course, harmonious songs that linger in your memory for days to come. Most importantly, the chemistry between its lead pair -- Varun and Alia -- is simply the icing on the cake.

‘Humpty Sharma Ki Dulhania’ is an exemplary Bollywood rom-com and ticks all the boxes that make a love story work. At the same time, Shashank Khaitan makes sure his screenwriting incorporates several amusing and captivating scenes that steer clear of clichéd formulas which we are used to witnessing in films of this genre. Shashank also manages to keep clear of full-scale melodrama, loud and familiar masala and earsplitting background score, which usually seep in naturally, given this film’s genre. He manages to keep things subtle, but at the same time lively enough to make sure the film wins you over.

The sequences between Varun and Ashutosh Rana are the high point of the film. Who can forget the scene at the railway station? Simply incredible! Of course, let’s not forget the ones between Varun and Alia who are the soul of the entire film, and the chemistry between them makes it all the more interesting.
As a storyteller, Shashank knows his fundamentals and he gives the protagonists a strong, consistent screenplay to base their acting skills on. Additionally, the film is filled with several solemn episodes, besides plastering the sequences with witty one-liners. When it comes down to the music of the film, the soundtrack compliments it delightfully. 'Saturday' has caught on big time, while 'Samjhawan' is hugely popular too.

Humpty Sharma Ki Dulhania, was the third dhamakedar film released by Dharma Productions this year. This film was a huge success owing to Varun Dhawan and Alia Bhatt playing the lead roles; and what a sensational job they did! They will undoubtedly win you over with their honest, unbridled performances. This film is an excellent tribute to Dilwale Dulhania Le Jayenge, and a film that the youngsters of this generation can completely relate to.

Posted by Dharma Productions at 20:00