Abhishek & Karan all excited and ready for Dostana 2 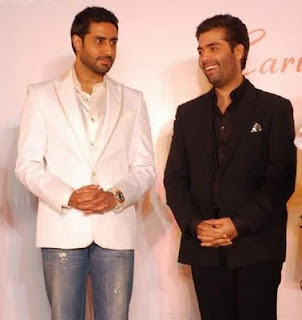 Kunal & Sam, from Dostana, made the Bollywood box office go mad with an unusual comic humor. Karan Johar, the producer of the film & the owner of Dharma Productions, shot the entire movie in Miami!! The color, background, cast, story and the entire location was loved and enjoyed by the viewers across the world.
A sequel to such a brilliant story line and cast is now reckoning!! AbhishekBachchan, himself, is all pepped up about it and wants Karan to start looking into the second part of Dostana!! He even tweeted asking Karan to make Dostana 2 first!! Karan replied saying, that it is a ‘MUST’ and he is all set for the making!! Considering both, the actor and the director's keenness for the second part of the movie, Tarun Mansukhani, the director of the first part should be equally excited!! Seems like another madness and craziness in the making... :)
Posted by Dharma Productions at 20:13