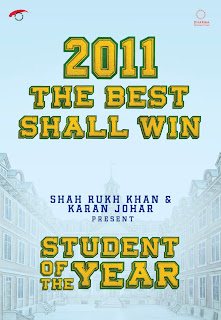 Karan Johar, who was out of Mumbai for a while to finish his script, is back in town again. He’ll start directing the movie ‘Student of The Year’ from August 16th onwards. On being asked if he was nervous about working with the newcomers, he said he was much more excited than nervous and that all the three newcomers, Siddharth, Varun and Aliya are enormously talented.

On being asked about his opinions on the abusive compliments made by Ram Gopal Verma for Amitabh Bachchan, he cited that it was blasphemous to do so, and that Amitabh Bachchan should be praised with utmost dignity.

Commenting on the fact that Satya by Ram Gopal Verma is among his top five movies of all times, Karan Johar says that Ram Gopal Verma has become a victim of his own image and that his recent movies and his comments on others irk him.
Posted by Dharma Productions at 19:41