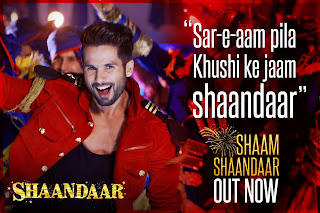 Dharma has always had a rich history of classic rom-com movies. Each and every movie made by them has always captured the hearts of their audience. The reason for this is because the essence of love has always been a vital factor in all Dharma movies. This essence has made every movie of Dharma relatable to people all around. Over the years that have been many star couples who have starred in Dharma movies and have portrayed the essence of love to the core. In this age, Dharma has not failed us yet again, Shahid and Alia’s onscreen chemistry in the upcoming film Shaandaar will set the screens on fire with their emotional attachment towards each other.
As they say every movie always requires a great soundtrack to make it a complete success and that is just what Dharma has done. The release of their latest song ‘Shaam Shaandaar’ sung by Amit Trivedi has already got people grooving to the amazing fusion of Punjabi Dhol’s and funky beats. The amazing lighting also adds to the party ambience of the entire song. But, Dhol’s , funky beats and trippy lighting are not enough to make a song unforgettable. The graceful and suave dance moves of Shahid will make your feet tap to the beat of this catch song. His smooth and captivating dance moves make the entire video so captivating.

The song ‘Shaam Shaandaar’ is a perfect blend of upbeat music with some classy and groovy moves. This one movie you wouldn’t want to miss. So, stay tuned because this movie is definitely going to make your day a ‘Shaandaar’ one.
Posted by Dharma Productions at 13:00