'My Name is Khan' continues to spread it's magic :)

The 4th Karan Johar's directorial movie -  My Name is Khan released in 2010 came with a buzz! Already in news for various reasons prior to its release, My Name is Khan lived up to the expectation and won millions of hearts all over the world!

After 2 years, today My Name is Khan was telecasted in London local channel and yet again it was successful in spreading it's magic. On a micro-blogging site MNIK was trending in London for more than an hour, our fans in London couldn't stop praising about the movie. The excitement in their tweets was clearly visible and it was just a great start to the day :)

Some of the tweets were as follows -

Tasmin Lucia-Khan ‏ @TasminLucia_I
What an amazing film. One of my top 10 films ever. Modern Bollywood at its best.... "My Name is Khan and I am not a Terrorist"

The given above are just few examples of the review that we received on My Name is Khan. We hope our movies continue to entertain you and touch your hearts...

Thank you for you love and support and Dharma Movies wouldn't be what it is today without you! 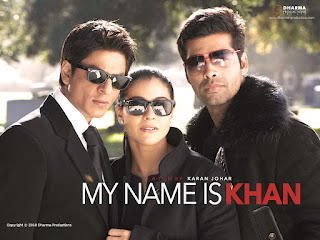 Posted by Dharma Productions at 19:45