Boman Irani on the sets of Student Of The Year

As we all are aware Kayoze Irani, son of Boman Irani is doing his acting debut with Dharma Productions awaited movie this year 'Student Of The Year' recently Boman Irani himself was spotted on the sets! He had come to the sets to accompany his son and for to support him. The shooting venue was Bangkok and apparently due to the excessive heat Boman Irani passed out on the sets!


Yes it is true, the heat was unbearable and perhaps it was too much for anyone. In his tweet he thanked everyone for their concern expecially his son Kayoze Irani and Karan Johar. "Yes it's true. I did pass out on the sets of SOTY. No big deal. Karan &@kayoze and the team were too caring. Thanks for the concern!"

However, good to know he came to conscious in just 5 minutes. We wish him all the good wishes for his health and are eagerly awaiting to watch his son in his first movie 'Student Of The Year' 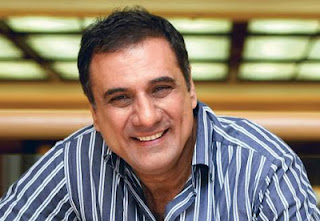 Posted by Dharma Productions at 20:12