The wait is over! Brothers trailer out tomorrow! 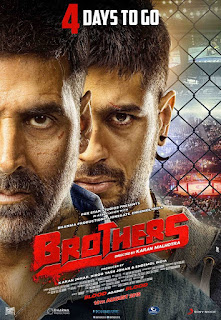 The wait is over, guys! Brothers’ trailer is set to be released tomorrow. The new posters that have been released in the past few days have stirred enough interest to keep the fans on edge.

What an entertaining hit is this going to be with an incredible cast including King of Action - Akshay Kumar, Sidharth Malhotra and the Man of Action – Jackie Shroff! We can just imagine!

The talk has been trending on Twitter already and with the heightened curiosity we can hardly wait to have a piece of the cake.

Brothers is a remake of the Hollywood movie Warrior starring Tom hardy and Joel Edgarton which has been a die-hard favorite of movie buffs and so now with Akshay and Sidharth, we are sure, everyone is awaiting an equally thrilling action-movie experience.