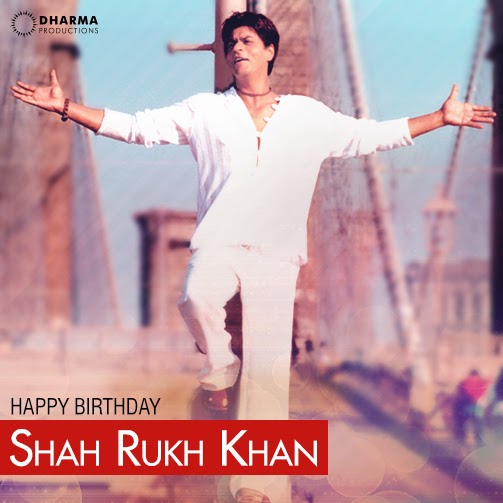 Shah Rukh Khan, one of the most popular and celebrated stars in Bollywood, turned 49 on November 2nd. A large number of his ardent fans turned up outside Mannat (his residence) to wish King Khan. The acclaimed actor made sure he did not let his fans down; he greeted and thanked them for their wishes.

We at Dharma productions had a very interesting and innovative activity on Facebook and Twitter called #SRKTaughtUs. We shared
various inspirational and comic dialogues from all his films throughout his acting career. These activities also gained a lot of publicity via various press releases in the The Hindu and The Indian Express. Dharma presents ‘best moment with Shah Rukh Khan’ spoke about some of the memorable moments we had with SRK. Inspirational dialogues like “Zindagi mein kuch banna ho, Kuch hasil karna ho, Kuch jeetna ho, to hamesha apne dil ki suno, Aur agar dil se bhi koi jawaab na aaye To apni ankhein band karke apne Maa aur Baba ka naam lo.” This dialogue from the film ‘Kabhi Khushi Kabhie Gham’ is what most of us SRK fans have grown up on listening to it time and time again, and the confidence it has instilled in us.

As a special treat on his brthday, we have created a special playlist with all his famous dialogues and scenes from his films. Go back in time and reminisce about the old memories of how it meant to fall in love with your true love.

Do you remember the young, vibrant and naughty Rahul Khanna (SRK) from the film ‘Kuch Kuch Hota Hai’? It was so charming to watch him as he worked his magic on all the girls at college and how he portrayed himself as the Ladies Man! In the film ‘My Name Is Khan’, we see SRK play the role of an autistic person who is branded as terrorist only because of his name. One can actually notice the versatility that this great actor possesses. From doing a role of a crazy happy-go-lucky college boy to that of an autistic person is simply amazing and will keep you wondering, what does this actor have that others don’t.

Join us in celebrating another great year of King Khan and tell us your favourite SRK moments in the comments below.
Posted by Dharma Productions at 20:13