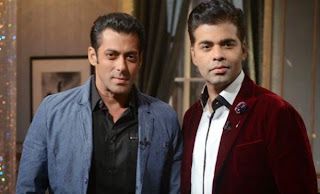 Special news for all Salman Khan fans! The actor will be playing the lead role in Mr. Karan Johar’s mega project ‘Shhuddhi’.

It will be the second time; Salman will be doing a film with Mr. Johar. Earlier, Salman made a guest appearance in the 1998 Bollywood blockbuster ‘Kuch Kuch Hota Hai'. ‘Shhuddhi’ will be helmed by director Karan Malhotra, of ‘Agneepath’ fame. It will be interesting to see the combination of the dashing Salman along with Karan, who impressed everyone with ‘Agneepath’. Watch this space for more updates on ‘Shhuddhi’
Posted by Dharma Productions at 16:04